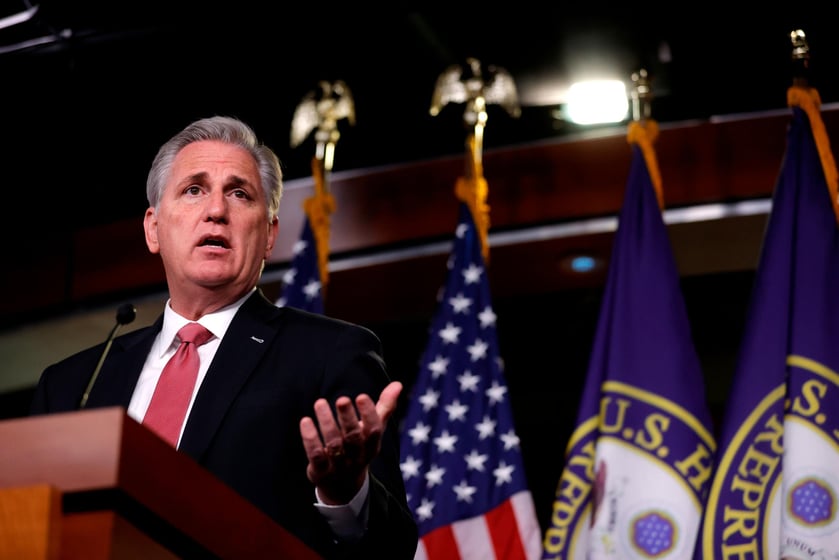 (CNN) -- House Republican leaders are lining up in opposition to a recently unveiled bipartisan gun safety bill and plan to urge their members to vote "no," even as the Senate moves toward passage of the bill this week.

House Minority Leader Kevin McCarthy of California and House Minority Whip Steve Scalise of Louisiana announced during a closed-door conference meeting on Wednesday that they are both a "no" on the Senate's bipartisan gun deal, according to a source in the room.

House GOP conference Chairwoman Elise Stefanik of New York said in a statement she also plans to vote against the bill, meaning the top 3 members of House Republican leadership are all united in opposing the legislation.

House GOP leaders also plan to formally organize against the Senate's bipartisan gun bill, according to Republican sources. A formal whip notice is expected to go out on Wednesday.

But even with House GOP leaders opposing the bill, there are already some Republican members who have indicated they plan to vote for it, and the Democrat-controlled House is expected to be able to pass the legislation once it passes in the Senate.

The Senate appears to be on track to pass the measure as early as this week. If passed, it would amount to the most significant new federal legislation to address gun violence since the expired 10-year assault weapons ban of 1994 -- though it fails to ban any weapons and falls far short of what Democrats and polls show most Americans want to see.

Republican Rep. Tony Gonzales announced on Twitter on Wednesday that he intends to vote yes on the bipartisan gun bill, saying, "As a Congressman it's my duty to pass laws that never infringe on the Constitution while protecting the lives of the innocent."

Gonzales represents Uvalde, Texas, where a recent mass shooting at an elementary school shocked the nation and led to public outcry.

"In the coming days I look forward to voting YES on the Bipartisan Safer Communities Act," Gonzales said.

The Senate voted to advance the bill on Tuesday evening, a key step toward final passage. And the chamber appears poised to soon pass the legislation after 14 GOP senators voted with Democrats in Tuesday's procedural vote -- more than the 10 required to join with Democrats to overcome a filibuster on the bill. A vote to overcome a filibuster is expected to take place on Thursday.

In a slide presentation Sen. John Cornyn presented to Senate Republicans at lunch on Wednesday, which was provided to CNN by a GOP source, the Texas Republican went through areas where the National Rifle Association got want it wanted — even though the pro-gun lobby is opposed to the deal.

Among the issues Cornyn noted: ensuring the fix to close the "boyfriend loophole" does not apply retroactively to past domestic abusers and only applies to recent relationships. He also noted due process rules for states that implement red flag laws, and a 10-year sunset provision to ensure all enhanced background checks to allow for searching of juvenile records will be "repealed" in a decade. He also promoted $300 million in "hardening schools" and $12 billion in mental health funding as NRA wins.

The effort was part of a sales job to grow GOP support beyond the 14 Republicans who voted to open debate, but a majority of Senate Republicans are still expected to oppose the bill.

Still, the legislation marks the first major federal gun safety measure in a generation, a significant achievement in a highly polarized political environment where gun policy is among the most contentious issues.

The bill includes millions of dollars for mental health, school safety, crisis intervention programs and incentives for states to include juvenile records in the National Instant Criminal Background Check system.

It also makes significant changes to the process when someone ages 18 to 21 goes to buy a firearm and closes the so-called boyfriend loophole, a major victory for Democrats, who had fought for a decade for that.

In contrast to the decision by the top 3 House Republican leaders to oppose the bill, Senate Minority Leader Mitch McConnell has said he plans to support it.

McConnell praised the bipartisan gun violence legislation on Wednesday as a "package of commonsense and popular solutions to make these horrific incidents less likely" that will not "touch the rights of the overwhelming majority of American gun owners who are law-abiding citizens of sound mind."

He said past attempts to pass legislation to curb mass shootings at schools and elsewhere stalled because Democrats tried to "roll back" people's Second Amendment rights.

"This time is different. This time the Democrats came our way and agreed to advance some commonsense solutions without rolling back rights for law-abiding citizens. The result is a product I'm proud to support," McConnell said on the Senate floor.

Senate Majority Leader Chuck Schumer reiterated on Wednesday that he intends to "secure final passage" of the bipartisan gun safety legislation before the end of the week.

"It is my intention now to keep the process moving quickly and secure final passage before the week's end," Schumer said in floor remarks.

He pointed to the 64 senators who supported the bill's advancement on Tuesday night, as "an unmistakable sign of the broad support and momentum behind this bill.

This story has been updated with additional developments Wednesday.