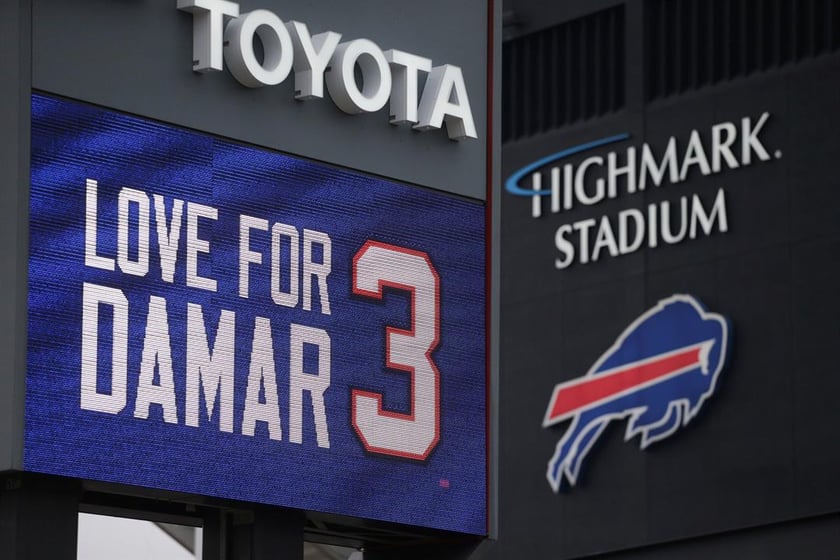 NEW YORK (AP) — Buffalo Bills safety Damar Hamlin plans to support young people through education and sports with the $8.6 million in GoFundMe donations that unexpectedly poured into his toy drive fundraiser after he suffered a cardiac arrest in the middle of a game last week.

He will also use proceeds from the sale of new T-shirts, emblazoned with “Did We Win?” along with his hands in the shape of a heart, to raise money for the trauma center in Cincinnati that treated him. Hamlin, who live-tweeted through his team’s victory over New England on Sunday, tweeted Tuesday that he has returned to Buffalo but is still in the hospital being evaluated.

The 24-year-old has teamed with The Giving Back Fund, a nonprofit that helps athletes and celebrities manage their charitable giving, to host the “The Chasing M’s Foundation” Charitable Fund. GoFundMe representatives told The Associated Press the crowdfunding platform will soon transfer the donations that have come in since Hamlin's injury Jan. 2 to the new fund. Chasing M's is Hamlin's apparel company.

Hamlin and his family “are humbled by the tremendous support that has been shown as he recovers," according to his marketing representative, Jordon Rooney. "They are incredibly grateful for the continued prayers and outpouring of concern that has been exhibited by people all over the world,” Rooney wrote in an email, adding that they plan to communicate with donors over time. The new fund is now soliciting donations online and via text.

“We are working as a team to facilitate the transfer as soon as practical,” said the Giving Back Fund. It plans to disclose the final total of all donations, which include support from star quarterbacks Tom Brady and Russell Wilson. As a fiscal sponsor for the donations, The Giving Back Fund is compensated for collecting the funds. The University of Cincinnati Medical Center did not respond to a request for comment.

Hamlin’s injury and recovery have created a boomerang of solidarity within the football community with fans donating, players honoring him and Hamlin tweeting appreciation back at all of them.

The largest public donation to Hamlin’s GoFundMe as of Tuesday was $33,333 from the Staten Island, New York-based ADCO Electrical Corp. Owner Gina Addeo didn’t want to give an interview, but the donation itself shows support — repeating Hamlin’s jersey number five times.

Similarly, Carl Fochler decided on a donation of $25,003 on behalf of the sustainable laundry company Sheets Laundry Club he co-owns. He stayed up late the night of Hamlin’s injury waiting for an update on his health. The next morning, he logged on looking for news and saw a link to a video of Hamlin talking about his fundraising for kids.

“I just knew right then it’s something we had to do,” he said, after talking with his business partner.

Fochler said he was born in Buffalo and adopted at six weeks old, adding another reason, besides being a die-hard Bills fan, to donate to Hamlin’s work to give children hope.

“I know how lucky or unlucky you can be. Paths can change quickly,” Fochler said.

Anna Isaacson, the NFL's senior vice president of social responsibility, was watching the donations roll in, even as Hamlin's health remained the priority. She began reaching out to “make sure that we all surrounded Damar and his family with the resources to really take on this massive project, which is going to be millions of dollars worth of contributions back to youth in the community.”

The league’s Player Health & Safety team is already reviewing their practices and policies following Hamlin’s injuries, which Isaacson said was part of their responsibility.

“People are watching our games and we have fans all over the country. And with that comes a responsibility to give back and to use these moments, often tough moments in time, and challenges to impact our society for the better," she said.

Fochler hopes the Bills make it to the Super Bowl, a dream for him and many fans. Asked how he was making sense of a moment with so many emotions mixed together – of watching a terrible injury and then the rebound of generosity, he said Damar had already made sense of it for him.

Pointing to a tweet where Hamlin wrote that he’d rather be running out of the tunnel at the start of the game with his teammates but, he said instead, “God Using Me In A Different Way Today.”

“When he wakes up and gets back to being Damar, and sees over $8 million,” Fochler said, “he’s got a lot of planning to do and it’s just going to be good vibes everywhere.”

Associated Press coverage of philanthropy and nonprofits receives support through the AP’s collaboration with The Conversation US, with funding from Lilly Endowment Inc. The AP is solely responsible for this content. For all of AP’s philanthropy coverage, visit https://apnews.com/hub/philanthropy.

Copyright 2023 The Associated Press. All rights reserved. This material may not be published, broadcast, rewritten or redistributed without permission.